We are in 2019 and I want to dedicate this month issue of my "Researchomnia" to two relatives I have in Venezuela and that I remember making my life happy since the distant 1959: Gloria & Susy. In those year we were 3 kids playing together every weekend Draughts, Chess, Chinese checkers, Chopsticks, Battleships and many other games that left a nice memory in my childhood. Later circumstances divided us and we had our personal life with different studies, works, marriages, etc...but every time we got in contact some "special" brotherly feeling arose between us.

For example, I remember that in my twenties I was always complaining that in Venezuela the political-economical-social situation was going to deteriorate and a lot of people smiled at me thinking that I was half-crazy or something similar...but Gloria & Susy always showed respect toward me and my ideas.

I pinpointed in those years that I was going to left the country (that in those years was enjoying the petro-boom after the 1973 oil crisis and was called the "Venezuela saudita" because of the richness created by the oil revenues) and move back to Italy, the country were I was born. My father was one of the 300,000 Italians who moved to the oil-rich Venezuela after WW2 devastated Italy. As a consequence I was brought to Caracas since child and -while doing between Italy and Venezuela my primary and secondary schoolyears- I was seeing & understanding (as an Italian in Venezuela) the differences between the two countries

Italy in those decades was a country that had a population with similar ethnic characteristics, the same language and religion but that historically has been divided in small political entities since the Middle Ages (because the Popes wanted to have his own state in central Italy and until the XIX century, when they started to lose power in Europe, they did not allow a unified Italy). Venezuela had one fundamental difference with Italy: it was the typical Latin-American country were nearly all the rich were Whites (mostly descendants from the Spanish colonists) while the majority of local population was poor and made of Blacks, Indians, Mulattos & mixed-race people (and sadly a huge amount of them -may be more than one third- was extremely poor).

When the Italians started to move to Venezuela mainly in the 1950s, they did it together with hundreds of thousands of Spanish, Portuguese and other Europeans. They found a country of just 6 million Venezuelans and many of them soon started to enrich with the development of the country. Most of these local Venezuelans were uneducated and poor, but with the improvements created partially by the European emigrants came also the betterment of all the Venezuela society. And came also the social ideals of equality that characterized the European society since the French revolution.

Venezuela had also a special characteristic, according to some historians and researchers (please read -for example and if interested- "The Whitening Project in Venezuela, ca.1810-1950 " by A.Alvarez https://etd.library.vanderbilt.edu/available/etd-12072016-162442/unrestricted/Alvarez.pdf): in the XIX century it was a country a bit similar to Haiti where the whites were "wiped out" by the non-whites (mostly Blacks) . I mean that after the white-ruled independence period, when Bolivar (a Vasque descendant) seemed to have created a country that would be at the level of the United States, the mixed-race "llaneros" of Paez took control of the country and in some cases killed the Spanish-descendants white population of Venezuela (as formerly did Boves and his bloody "llaneros" in 1814: https://www.aporrea.org/internacionales/a96542.html). The result was a political anarchy that practically reduced Venezuela to a very low level of development. The only luck for Venezuela was that the massacre of Whites was not full & complete like in Haiti (that is now the poorest country in the Caribbean) and so in the early XX century the country started to return to the civilized levels reached during Bolivar leadership.

But this "special" characteristic of Venezuela started to show up again in the late XX century: I remember to have personally experienced the "hostile feeling" of the majority of mixed-race Venezuelans against the million of Europeans immigrated in the 1950s (and who had enriched in the oil rich country while in many cases were controlling the economy, mainly in the industrial and service areas). It was a bit like a time-bomb waiting to explode: only the local Venezuelans who were Whites accepted the integration of the Europeans, but for the mixed-race people the rejection was growing year after year (in 2013 the Washington Post wrote that "Venezuela was the most racist country in America": please read http://elestimulo.com/climax/la-venezuela-multicultural-aun-esconde-racismo/). And it was aggravated by the growing corruption of the rich people (nearly all white, as said before) of Venezuela

Anyway, I want to pinpoint that I disagree with the theory that Venezuela has "real" racism (of Whites and/or non-Whites). I think it is a country where the economical situation between rich Whites and poor mixed-race people is used as an excuse for political reasons. In Venezuela Blacks can reach top levels in the society without a lot of difficulties (while this has not happened in the USA -for example- until the 1970s). Furthermore, I personally know many "mulatto" and "mestizo" friends who enjoyed top socio-economical positions in Caracas, and in some cases were happily married with White women. Of course some problems and difficulties between people of different races & ethnicity existed in Venezuela, but were similar -more or less- to the ones experienced by a dark haired southern Italian living in blonde haired north France or Holland, to give an example.

However the Italians in Venezuela -going back to our initial topic- soon reached top economical positions in Venezuela and I myself enjoyed some of this situation thanks also to my father who become a vice-president of one of the best banks in Caracas. But when I started to study in the Universidad Central de Venezuela (UCV) for "Administracion y Contaduria", I found myself in a place practically dominated by leftist organizations. After the first months there, I was continuously contacted for possible enrollment in some of the many "revolutionary" movements that existed in this 'Ateneum'. I always refused any inscription, but I had a love flirt -during those months- with a girl who was the daughter of the secretary of the Venezuela Communist Party. She opened to me the door of the inner circle of this organization (that was weak in those years) and so with her I participated in some of their political reunions, where I did a bit of friendship with their leader Gustavo Machado and some former guerrilla militants.

I remember that some of them usually discussed about how to get political control of the country: the guerrilla movement seemed at a loss in the 1970s, but they pinpointed that they could win the vote (in normal elections) of the masses made of poor Venezuelans if the could find the leader able to do this achievement. They argued that the instructional levels of the poor citizens were improving after years of alphabetization and so they could be instructed to vote for themselves against the parties of the "capitalists" (like AD & Copei); and they noted also that the rich class of Venezuelans were falling more and more in a corruption process, that was creating a gap of confidence in the society and alienating the poor mixed-race people against the minority of rich "capitalist" Whites.

Sincerely, I had to accept that something of their "plan" was effectively going on, when I saw the corruption of president Carlos Andres Perez who was considered the richest man in South America with his powerful "12 apostles" & related families (the Mendoza, the Boulton, the Cisneros, the Pocaterra, etc..) supporting him. The first clear evidence came in 1989 with the "Caracazo", followed in 1992 by the "golpe" of Chavez (a Barinas "llanero", who was the perfect leader "dreamed" in the 1970s by the Venezuelan communists).

Chavez was a typical mixed-race Venezuelan born in Barinas plains and so he was a "llanero", who seemed the heir of the Paez "llaneros": he has damaged Venezuela development in a similar way to what happened after the Bolivar era. As of 2018 nearly 3 million Venezuelans have moved out of the country -with the economy dangerously shrinking- since he become president in 1999 (I still remember the smile of those who looked at me as if I were an half-crazy doomsayer, when I predicted all this disaster thanks to my 1970s "contacts" in the UCV's communist party)........and what is more worrisome is that the International Monetary Fund has predicted a monster-inflation in Venezuela of nearly ten million percent by the end of 2019! Now in January 2019 is at an astonishing 1300,000 percent: imagine that the 300,000 percent was the inflation in 1930 Germany that opened the doors to Nazism! That means that nobody knows what can happen in Venezuela.....

An anti-Chavez march in 2004 eastern Caracas 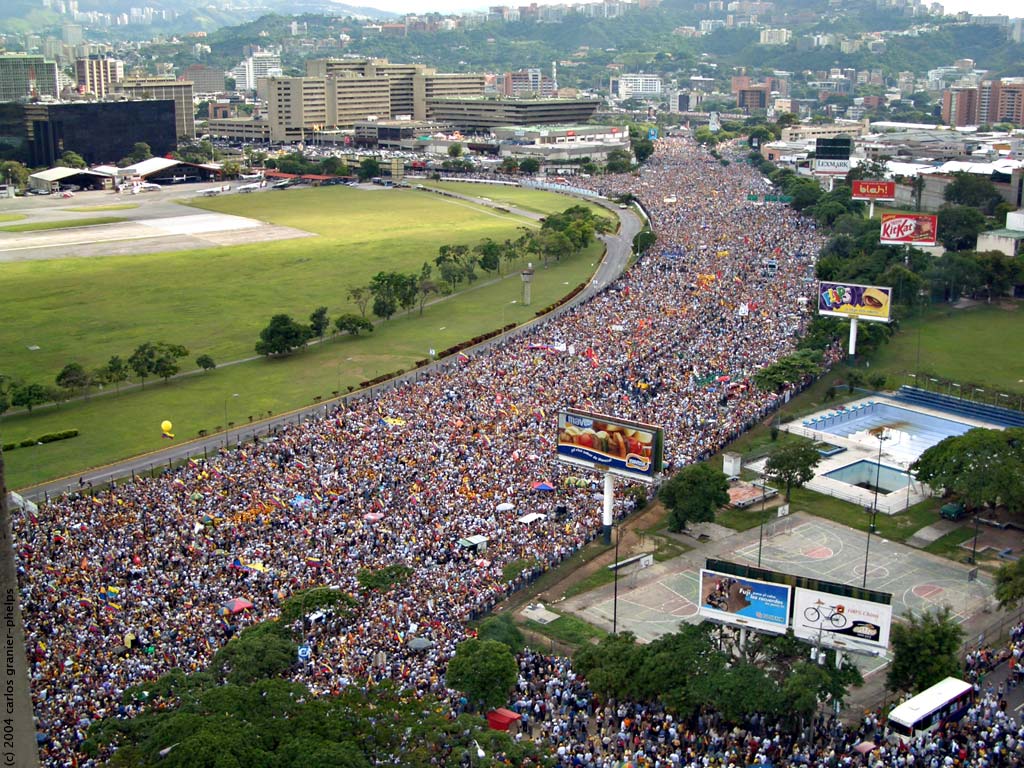 Anyway, let's hope that something good can appear on the horizon of the beautiful country that is Venezuela....and so the remaining community of the Italians in Venezuela can enjoy again something of the wonderful 1950s/1960/1970s.

These decades were a period when Caracas was like the Abu Dhabi of today and the country was nicknamed the "Venezuela saudita" (please read my 1981 essay http://researchomnia.blogspot.com/2012/02/estudio-sobre-los-aspectos-etnico.html, done for the "Universita di Genova"). It was the country judged rich & famous in Miami, where the Venezuelan tourists were nicknamed "..'ta barato, dame dos" (meaning that they bought everything two times, because they were very rich and everything seemed to them to be "cheap")

The following are excerpts written by me on the Spanish Wikipedia inside the article "Italianos en Venezuela" (if interested the reader can see the reduced English version here: https://en.wikipedia.org/wiki/Italo-Venezuelans):