Many researchers have written about Roman penetration into what is now Azerbaijan and even possible direct contacts between Rome and the Chinese Imperial court. But an academic from Israel (professor Yulia Ustinova) recently has made a claim that Romans – it is argued legionaries – visited western Uzbekistan (the caves at Kara-Kamar) close to Afghanistan in the early centuries AD.
Indeed Yulia Ustinova, of the Ben Gurion university in Israel, wrote the book ‘New Latin and Greek Rock–Inscriptions from Uzbekistan’ about this astonishing possibility.
Obviously, it should be stated that this would be an extraordinary occurrence. But it is not an impossible suggestion. Armenia was briefly a Roman province in the second century AD and a Roman ‘protectorate’ for much, much longer. And a Roman military detachment went just a little further and left an inscription on the western banks of the Caspian Sea near Baku.
Roman legionaries did an inscription in eastern Azerbaijan (60 kms from Baku), which reads: "IMP DOMITIANO CAESARE AVG GERMANICO LVCIVS IVLIVS MAXIMVS LEGIONIS XII FVL, Under imperator Domitian, Caesar, Augustus Germanicus, Lucius Julius Maximus, Legio XII Fulminata", but these Kara-Kamar inscription are located nearly 1500 kms more to the east and so it is the furthest eastern place a Roman soldier went.
The Roman inscription in Baku: 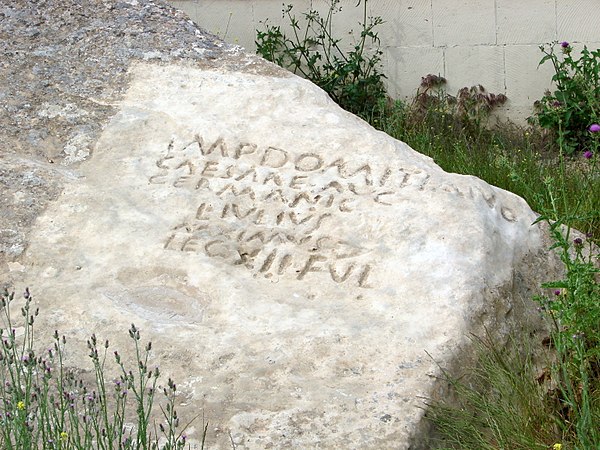 In the late 1980s some "Mediterranean graffiti" were discovered in a complex of caves at Kara-Kamar in Uzbekistan near the border with Turkmenistan and Afghanistan, to the west of Termez. These kinds of graffiti were 3 inscriptions: 2 in Latin and one in Greek:
1) ROD/ PAN …/ I M
2) PAN/ G REX/ AP. LG
3) RIPOS ETHE(KE)
The three inscriptions studied in detail by Ustinova are extremely abbreviated, mainly the first two in Latin. This is natural in Roman inscriptions and even more so in graffiti. But it also means to some critics that a few scratches, possibly from another alphabet or epoch could easily be misread into Latin or Greek, especially given that there are other graffiti in Russian, Uzbek and Arabic that complicate the readings.
So the letters ‘I M‘ at the end of the first inscription are taken by the academic editor to be an abbreviation for ‘Invictus Mithras’, ‘Unconquered Mithras’. The editor goes on to suggest that the complex may have been used by Roman soldiers as a Mithraeum.
AP LG is meanwhile interpreted as ‘AP(ollinaris) L(e)G(io)’ ‘the Apollonian Legion XV’. The XV was based in Cappadocia in the east of the Empire, so this would make sense. But again the ‘abbreviation’ (if that is what it is) could be read in other ways and the missing number is a bit strange, according to critics.
The evidence that gives some context to these finds can be read in "The Historia Augusta" (written during the late centuries of the Roman empire), which claims that the Emperor Hadrian (117-138 AD) received ambassadors from the Bactarian kings, almost certainly the Kushan Emperor offering friendship, and that the Kushan Empire would have controlled Kara-Kamar. Military contact could have come on the back of such a visit or another now forgotten embassy. Alternatively the Roman soldiers could have been prisoners.
The authors of the Kara-Kamar Latin inscriptions -according to Ustinova- regarded the cave complex suitable for the Mithraic worship. These inscriptions were incised by soldiers of the "XIV Apollinaris Legio" in the second-third centuries AD, and the cave complex itself served perhaps as a "Mithraeum" (a temple to worship the Mithraic cult).
The inscriptions inside the Kara-Kamar cave are located not far away from Alexandria on Oxus, an important city of the pre-Roman Bactrian kingdom:

The publication of this fascinating possibility came from Yulia Ustinova: her authority means that these inscriptions must be taken seriously.
Yulia Ustinova wrote later, supporting her findings from critics: ‘In fact, I still think the inscriptions were left there by Roman soldiers, probably captives: there were no other inscriptions in Latin or Greek characters in the cave, and while those in Latin consist of abbreviations that – theoretically – can be interpreted otherwise, the Greek one is unequivocal. Now, who and when could leave a Greek inscription in Uzbekistan? I still consider the suggestion put forward in the Hephaistos article plausible.’
However I want to remember that emperor Trajan in 116 AD conquered all Mesopotamia and obtained the submission of the king of Persia, Parthamaspates, who so was the Roman client king of the Parthian Empire (he was the son of the Parthian emperor Osroes I).
Indeed Parthamaspates, after spending much of his life in Roman exile, accompanied the Roman Emperor Trajan on the campaign to conquer Parthia. Trajan originally planned to annex Parthia as part of the Roman Empire, but ultimately decided instead to place Parthamaspates on his father's throne as a Roman client, doing so in 116 AD after defeating the Parthians at a battle near Ctesiphon. But just one year later, following Roman withdrawal from the area, the Parthians easily defeated Parthamaspates and reclaimed the Parthian throne in 117 AD.
We know that Romans always helped the kings of their "puppet states" (historically called "Client-States"), sending some legionaries inside the territories of these Client States: obviously I wonder if someone of these legionaries went to the northern limits of the Parthian kingdom for some reasons we cannot know...may be these legionaries reached the Kara-Kamar caves located between the Parthian territories and the post-Bactrian kingdom!
Posted by Bjr at 4:34 PM 1 comment: