The following are excerpts from an article in an english newspaper written in 1999, that explains how the ethnic cleansing in Bosnia and Croatia of the 1990s was very similar to the one initially done with the Italians in Istria and Dalmatia in 1945: Italy foots the bill for Tito's ethnic cleansing, by Chris Endean in Trieste

The Italian government has intervened to help thousands of exiles to win back homes they lost when the Yugoslav dictator Marshal Tito annexed the Istrian peninsula.

In a forerunner of the horrors that have swept the Balkans since the collapse of the Yugoslav federation, more than 350,000 Italians were forced to abandon their homes between 1947 and 1954 to flee Tito's ethnic cleansing, in which more than 20,000 people were systematically executed. Almost 50 years later, Italy has offered to grant millions of pounds in compensation to give the Federation of Istrian Exiles the chance to buy back their property. "This is a tremendous window of opportunity to solve an historic problem," said Senator Lucio Todt, the president of the Federation of Istrian Exiles.

In return for Italy lifting its veto on Slovene membership of the European Union, Ljubljana has agreed to offer Italian exiles first right of refusal when a house comes on to the market. While hundreds of former Italian houses remain abandoned in dilapidated Istrian villages, many are now "owned" by second and third generation Slavs.

In such cases, the exiles have agreed to drop claims for their old property on condition they are given the chance to buy another house in Slovenia. "This decision represents a great sacrifice for us but demonstrates our willingness to reach a final solution to the Istrian Question," said Renzo De' Vidovich, a former president of the Istrian exiles federation.

More than 25,000 exiles, living mainly in Trieste but also in Canada and Australia, have applied for the cash. After troops in 1954 took over the village of Momiano, just over the Slovene frontier, murdering the local Italian count and ransacking his house, the number of inhabitants dwindled to just over 100. But exiles have never abandoned hope of claiming back buildings they once called home; the door of each house is still tightly closed with a rusting padlock and chain. "I would buy back my house immediately. It would cost nothing to restore as a weekend retreat," said Luciano Parovel of Trieste, whose old house lies in ruins, weeds growing out of the roof and trees taking root in the kitchen.

Mussolini annexed Istria, Dalmatia and Fiume during the Second World War but they reverted to communist Yugoslavia after 1945. Yet, when 350,000 exiles fled Tito's "ethnic cleansing", the Italian government failed to intervene. At least 20,000 ethnic Italians were pulled out of their beds in the middle of the night, tied together and hurled to their deaths into deep crevasses in the Istrian limestone, known as foibes.

"Everyone talks about Bosnia and Kosovo as if ethnic cleansing was invented in the Nineties. But we were the first victims," said Mr De' Vidovich. Anita Derin, 65, was born into one of Capodistria's wealthiest families with a house in the town and a summer villa in the rolling hills overlooking the Adriatic. At the age of 12, communists expropriated her house. "I remember a partisan walking straight in and telling us that he wanted to choose a room," she recalled. "He went into my bedroom and said 'the bed's for me and the couch for my dog'." Within days of watching her pony slaughtered to help to feed Yugoslav soldiers, Anita and her family fled Trieste, and her parents both soon died of heart attacks.

Most Italians know little of the atrocities suffered by the Istrian exiles because for half a century the national curriculum has whitewashed the subject. The croatian authorithies have created a huge organization that aims to erase evidences of italian presence in Istria and Dalmatia, through propaganda on books and news articles mainly in english.

Now finally the negotiations between the exiles' federation and the government have agreed on taking the foibes into the classroom. Indeed the Croatian authorities in Istria and Dalmatia have created a huge propaganda organization that aims to erase evidences of italian presence in the croatian coast from Pola (now called Pula) to Ragusa (actual Dubrovnik). All maps, for example, in english books are promoted by this organization (with direct contact of the publishers) to show only names and borders from the croatian point of view. Other actions of this organization are done through the internet with forums, where groups of croatian writers influence the other forumers to believe that Dalmatia was always croatian in History.

The exiles however maintained their own groups advocating for their lost properties. On compensation, the italian treasury has admitted that in 1954 the Italian state used Yugoslav cash intended for the exiles to pay its own war debts."Italy owes compensation to the exiles," a report said. Sen Todt has described the Treasury's offer of 24 billion lire (£8 million) over three years as "laughable". The exiles say the government had originally promised 5,000 billion lire (£1.6 billion).

Even foreign ministry sources admit that the offer is "simply not good enough". But the government remains committed to finding a solution. "We badly want Slovenia to enter the European Union," said Andrea Romano, the diplomatic counsellor to the government on Istria, "so we cannot drag this problem into the future. Remember Europe solved the Alsace-Lorraine question between Germany and France. We want Europe to do the same for Istria." 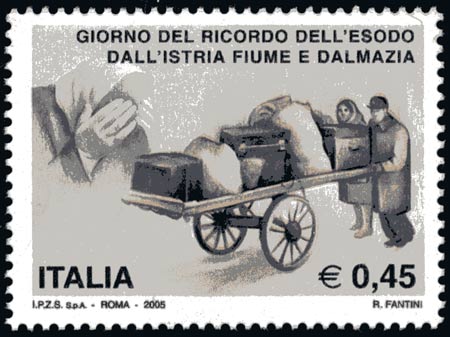 Additionally we need to pinpoint that -according to Edwin Veggian- after the ethnic cleansing of the autochtonous Italian population in Dalmatia, Quarnero region and Istria, Croatian nationalist historians are "cleaning" (meaning: falsifying) also the Istria/Dalmatia History (as is happening actually with Bosnia's History). They are publishing books in English language and using Internet sites to spread a false History of the above mentioned regions.

So, all Italian patrician families that governed for more than a thousand of years the "Repubblica di Ragusa" (actual Dubrovnik) are being given "a corresponding Croatian name". For example: the bishop of Capodistria (1500's) Pier Paolo Vergerio is being presented as "Petar Pavao Vergerije" without telling readers that he was not a Slav; Natale Bonifacio, a cartographer, and Martino Rota, a portraitist, both born in Sebenico (Sibenik) are called respectively Bozo Bonifacic and Martin Rota Kolunic.

But what is most shocking is the Croatian tentative to present Marco Polo as a "Croat".

Indeed on 22 April, 2011, most of the media outlets in Croatia began reporting the response of the Italian newspaper "Corriere della Sera" to the news that the former Croatian president, Stjepan Mesić, had publicly proclaimed the Dalmatian (and therefore Croatian) origin of the “world’s first tourist” during the opening ceremonies of the Marco Polo Museum in Yangzou, China. Journalist Stella entitled his article, ‘Ecco Marko Polo, esploratore croato’ (Here is Marko Polo, the Croatian explorer) and appended the following subheading: ‘Se Zagabria ci scippa l’eroe del Milione. L’ex presidente Mesic va in Cina e celebra “il viaggiatore di Curzola” che ha avvicinato i due mondi’ (‘Is Zagreb kidnapping the hero of Il Millione’ (Travels of Marco Polo) Ex president Mesic had travelled to China and praised “the traveller from Curzola” (Italian name for Korčula Island) who had connected two worlds). Most of the media simply informed the public of the condemning tone of the Italian article and did not enter the debate.

Croatian journalist Bešker commented that the Croatian claims to Marco Polo’s origin were nonsense and lacked historical validation, introducing a tone of mockery. And Scotti, a journalist for "La Voce del Popolo" -the daily newspaper of the Italians in Istria and Fiume (actual Rijeka)- in an article entitled "E dopo le amebe vennero i Croati (And after the amoebae the Croats came)" classified the Croatian claims to Marco Polo’s origin as a “theft of heritage” and even lambasted it as “the usual Croatian practice of stealing the Italian heritage”. 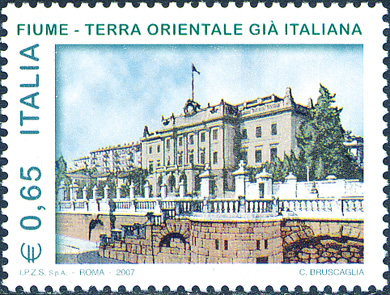 The ridiculous level in this falsification process was reached in 2007 when the Italian government issued a simple post-stamp showing "Fiume" (actual Croatian Rijeka) with the writing "Fiume-Terra orientale gia' italiana" ("Fiume - eastern territory that was Italian"): the Croatian authorities created a diplomatic mess and ridiculously demanded the elimination of this stamp, because they did not want to admit that this city was an italian town that has been part of Italy.

But this is a complete falsification of History, because Fiume was officially a city of the Kingdom of Italy from 1924 to 1943, as has been recognized by the same Yugoslavian authorities in Treaties.

So, the stamp was remembering a truth....but the Croatian government of Mesic (the same who did the falsification about Marco Polo) could not accept it: they cheat and cheat and cheat without any shame!

Anyway, the following is a comical image of how ridiculous is this "croatization" process, promoted by the Tito-supporters and other fanatical croats like Mesic:

The discovery of Amerika by the Croats

(An image showing "Kolumbuc" -a croatized Columbus with a red star hat- discovering Amerika with the caravel "Sv. Marija" (his sailing ship under Croatian flag and decorated with a huge image of Josiph Tito) and saying in Croatian language: "We Croats made Amerika; Amerika made us. Long life Tito")

Read there the article of the "Lega Nazionale" written some years ago by Fausto Biloslavo about the famous italo-american chef Lidia Bastianich Matticchio, who was born in Istria.

Her family is Italian, but with some croatian roots.
Posted by Bjr at 9:59 AM 4 comments: