There are many studies about the Romans in eastern Africa (Somalia, Kenya and Tanzania coast). Some are done by Felix Chami, professor at the Dar es Salaam university (read http://www.academia.edu/15058889/Metropolis_of_Rhapta_and_Azania -----&-----http://nabataea.net/juani.html ). This academic professor is detailing with his researches the Roman presence in the Tanzania coast, a region used to be called in classical centuries with the name "Azania" and that had as the main port a city called "Raphta". Of course we must pinpoint that Romans had a huge commerce for centuries with Raphta, that was the southernmost locality which was possible to reach from their Red sea port of Adulis using the Monsoon winds. And we must remember that Ptolemy the Geographer, a Greek-Roman citizen of Egypt, writing in his Geography in the second century AD, described the interior of Africa beyond Ethiopia quite accurately: "toward the west are the Mountains of the Moon from which the lakes of the Nile receive snow water." This description shows a knowledge due mainly to the commerce done by Roman merchants in the eastern Africa coast During Caesar times, the port of Rhapta (located near Dar es Salaam in Tanzania) emerged as the principal commercial center on the east African coast. With increasing trade, groups of professional merchants and entrepreneurs emerged at Rhapta, and coins came into general use on the east African coast. Merchants of Rhapta imported iron goods such as spears, axes, and knives from southern Arabia and the eastern Mediterranean region controlled by Rome in exchange for ivory, rhinoceros horn, tortoise shell, and slaves obtained from interior regions. Indeed Ptolemy goes on to itemize a long list of towns and ports all down the eastern seaboard of Africa. Some scholars believe that his knowledge of the coast extended as far south as Cabo Delgado in northern Mozambique. Ptolemy included details of the latitude of each place he mentions. The most intriguing of these is a port called Rhapta which is also mentioned in a book written by an unknown Greek author called the Periplus of the Erythraean Sea. The Periplus is probably the most comprehensive documents we have of the ancient world of the Indian Ocean. According to the most thorough translation by Lionel Casson: "Two runs beyond this island comes the very last port of trade on the coast of Azania, called Rhapta, where there are great quantities of ivory and tortoise shell." The following is a map from Wikipedia showing the possible location of Raphta in the eastern Africa coast: 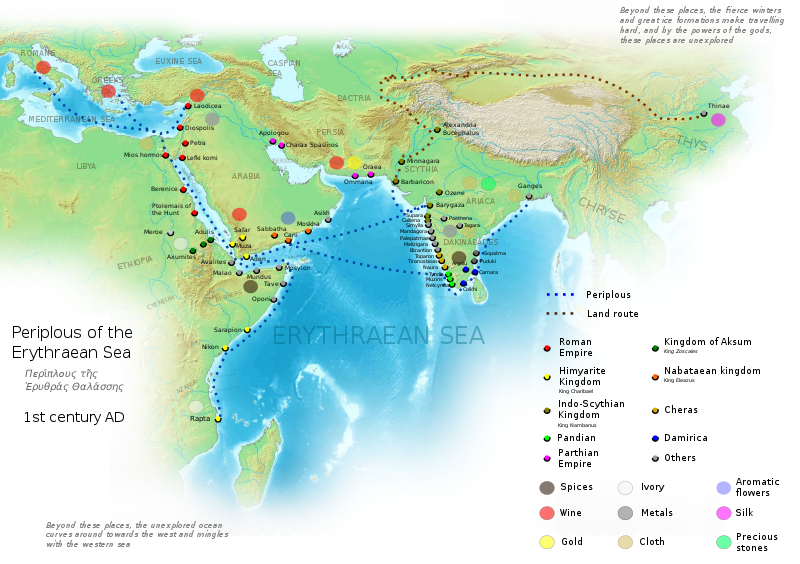 A ‘run’ is about 100 nautical miles. The mysterious island is very likely Zanzibar which means that Rhapta would have lain at the mouth of the Rufiji River in Tanzania. This is supported by finds by the archaeologist Felix Chami of the University of Dar Es Salaam in which he uncovered Greco-Roman pottery and Syrian glass. Even more recent discoveries based on his reading of Ptolemy have led to his unearthing shards of pottery and human bones on Juani island off the coast at Rufiji which point to extensive East African trade in the ancient world. It is possible that the island the Periplus talks of is the larger Mafia island off the Rufiji delta which would then add further evidence to the Romans and Greeks being familiar with the coast as far south as Mozambique. Even old Chinese documents point to the likelihood that the Greeks and Romans were familiar with the east and southern Africa. The fragmentary remains of text and footnotes of the "Weilüe" -an account of the Wei dynasty by historian Yu Huan written in the third century- refers to the ‘kingdom of Da Qin’ (which was Rome) and the territory of ‘Zesan’ which scholars believe is likely to be a corruption of ‘Azania’, the Roman and Greek name for the East African coast. The Periplus (written around 50 AD) explicitly states that Azania was subject to Charibaêl, the king of both the Sabaeans and Homerites in the southwest corner of Arabia (including Aden). The kingdom is known to have been a Roman ally at this period. Charibaêl is stated in the Periplus to be “a friend of the (Roman) emperors, thanks to continuous embassies and gifts” and, therefore, Azania could fairly be described as a vassal or dependency of Rome (Client-State), just as Zesan is described in the Weilue. Indeed in the Chinese Weilue (written around 230 AD) there it is written: Section 15 – The Kingdom of Zesan (Azania). The king of Zesan (Azania) is subject to Da Qin (Rome). His seat of government is in the middle of the sea. To the north you reach Lüfen (Leukê Komê). It can take half a year to cross the water, but with fast winds it takes a month. (Zesan) is in close communication with Angu city (Gerrha) in Anxi (Parthia). You can (also) travel (from Zesan) southwest to the capital of Da Qin (Rome), but the number of "li" is not known. Furthermore we have to remember that the emperor Augustus planned an expedition around Africa with roman ships starting from the Red Sea, but it was never done. Coins survive for centuries and are reliable indicators of extensive trade, but they can be carried for thousands of miles in a leather pouch or even someone’s pocket so they are uncertain indicators of any Greek or Roman presence in southern Africa. Nonetheless, Victorian archaeologists searching the ruins of the civilization of Great Zimbabwe found a coin from the reign of the Emperor Antoninus Pius (AD 138 - 161) in an old shaft near Mutare at a depth of nearly 25 metres which indicates an age of some antiquity. Curiously, too, a Roman coin from the reign of Emperor Trajan (AD 98 -117) was found on the Congo River about a century ago. Furthermore, J. Innes Miller points out that Roman coins have been found on Pemba island, just north of Rhapta, and Germans of Tanganika found two Roman coins in Kilwa Kisiwani on an island next to the Mozambique border (read http://www.tandfonline.com/doi/abs/10.1080/00672706609511349?journalCode=raza20 ). Indeed on the central Mozambique coast, Dundo and Chibuene have produced glass beads from the Mediterranean sea and Middle Eastern pottery of mid/late first-millennium age. An Omani green glazed ware fragment at Chibuene suggests that contacts reach back to the early fifth century (read http://www.researchgate.net/publication/265050510_Glass_finds_from_Chibuene_a_6th_to_17th_century_AD_port_in_southern_Mozambique ): these contacts from Chibuene (located south of the Zambesi river delta) probably reached the highlands of what is now Zimbabwe. This suggest that probably agriculture was favored by roman commerce in the region of Africa that a few centuries later saw the rise of the famous ancient "Zimbabwe kingdom". In the fifth century the Roman commerce with Azania & Raphta seems to disappear, probably because of the barbarian invasions in Europe. Recently have been discovered what look like some ruins of Rafta on the coast of Tanzania: read http://www.ibtimes.co.uk/africas-atlantis-lost-roman-city-rhapta-discovered-off-tanzanias-mafia-island-believes-1564843