Denmark and The Roman Empire The “Roman Iron Age” in Denmark, the years 0 – 450 AD, has traditionally been largely overshadowed by the Viking period from 900 – 1200 AD. And to many Danes this “Roman era” is still a dark chapter in the Danish history. Many finds in Denmark are from this period. But it is worth mentioning that many of the discoveries, especially from the first and second Century, are gravefinds and finds of Roman goods that clearly have been cherished by their owners. They are not prizes of war, but goods that have been traded and perhaps given to their owners. Things that appearantly show, that the danish tribes in this age, had a friendly and close relationship with Rome. A friendship wich counted trading and a wide support from the tribes to the Romans. A support that also encounted danish tribesmen participating in the Roman wars against other Germanic tribes, probably as "Auxillia" (supporting troops) or, in the later periods, as regular soldiers in the Roman Army. 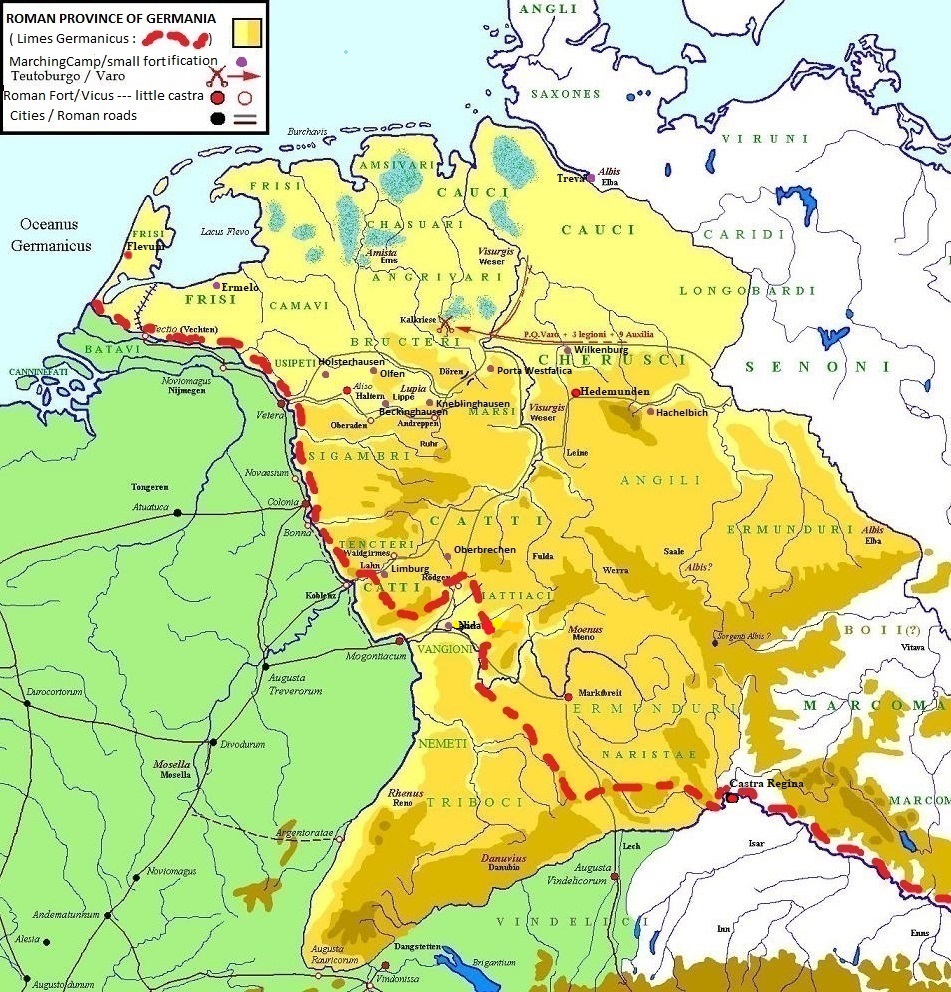 Trading and Alliances Though the plans for the northern germanic territories were abandoned by the Romans, it seems that a broad contact were established between the Romans and the tribes of Southern Scandinavia. Especially famous is the trading expeditions to the Baltic for "Amber" to ornate the Emperor Neros palace after the burning of Rome in 64 AD. This palace was later demolished by Vespasian, and he and his sons Titus and Domitian erected the Colloseum at its place. Furthermore, it is noteworthy to pinpoint that Roman merchants also traded with southern Sweden and the Öland island was a trading outpost, according to recent archaeological discoveries. The Romans who travelled north for ‘the gold of the Baltic’ (as was called the "Amber") would take with them various items to be traded, including fabrics, ceramics, metal objects, trinkets, wool, as well as bronze and brass artefacts. They brought back sacks of amber, animal skins, wax, feathers and beaver coats. Due to increasing intense economic contacts, Roman coins also were started to be used (nearly one thousand "solidii" -from the fourth and fifth centuries AD- have been found in the southern Scandinavia region, read numismatics.org/digitallibrary/ark:/53695/nnan59692), but actually there it is not a huge research by academics on this matter. However, there are some interesting studies in the last years about the so called "Sweden's Pompeii": Sandby borg in the island of Öland (if interested read researchomnia.blogspot.com/2018/08/the-pompeii-of-sweden.html).

The archeological discoveries in Denmark from this period are really interesting. Especially the great gravefinds from Himlingoje on Southern Zealand, Gudme on Funen and the rich Hoby graves from Lolland. In these large finds, a wide range of Roman officers equipment were found. And especially two Silver Cups from Hoby are of great interest. Not only because of their superb quality, but also because of the name “Silius” wich is ingraved in the buttom of the Cups. This “Silius” appears to be the Roman Commander who were stationed with the Rhine Army in the years 14 – 21 AD, with the purpose to find the locations for the Varus disaster and conduct punitive expeditions into the german controlled territories around the Elba river (read for additional information The Roman Empire and Southern Scandinavia - a Northern Connection!Grane, Thomas). If Silius is the former owner of the Hoby Cups, the idea that danish tribes were hired as "Auxilia" to the Romans seems obvious. Wich also explains the many other finds of Roman military equipment in Denmark from this period. For instance a beautyful 1st Century Pugio found in a grave near Horsens in Jutland. Together with this Pugio, there were found also a Roman style Hamata and a Roman military Balteus and other personal equipment. A discovery that appearantly show the presence of Roman military activities in Denmark, or “Danes” that served with the Roman Army. Findings all over Southern Scandinavia, of especially Fibulas, indicates that a small “Empire” (or "Client State") was present here in the first and second Century. With a “Himlingoje Dynasty” as rulers. This “Dynasty” not only traded with Rome, but appearantly also lived a very “Roman” style of life. If there were such an “Empire”, it is obvious that the Romans could benefit from this State, and seek alliances with this regime. Alliances that today is described by historians as Denmark beeing a “Client State” of Rome: it was a supportive territory for the Romans where they traded and recruited Auxilia and soldiers for the wars down South.